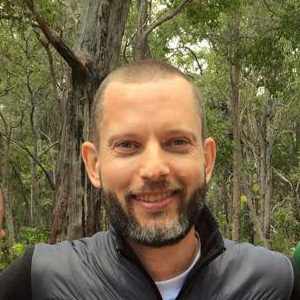 I’ve been an on-again, off-again runner since high school days.  I participated in a couple of Perth C2S races in the 90’s, but I’d never been motivated enough to run further than 10-12km.  In December 2011, with my 40th birthday looming (and my gut ever-expanding) I made an early new year’s resolution to run the 2012 Perth Marathon, and started on a 16-week internet training plan. Everything was going swimmingly until my father commented on some swelling in my neck in March, which turned out to by thyroid cancer, requiring two surgeries in June and putting an end to my marathon plans. Not to be put off, I kept training and entered the PTS summer series (short course) in early 2013, completed my first half marathon at Bunbury in 2013, and then the Perth, City to Surf and Rottnest marathons later that year.

After meeting Rob D on a training run pre-marathon, I learnt that people actually ran further than marathon distance, and my interest was piqued – after all, once you’ve run a marathon, then what?  This led to my running the Kep 100k in 2014.  In 2015, my goal was to run every ultra in WA —  I didn’t quite make it (skipping the Bunbury 50k event in April after running Truth 50k and Mt Helena 40mi the previous weekend), but still had one heck of a year. In 2016, I’ve slightly different goals, starting with the Tarawera Ultra 100km in February (race report here), and building up to some much longer distances by year’s end …

Setting a good example for my children and keeping the weight off. I’m also a little compulsive when it comes to my hobbies, so am always looking to set new goals.

Something along the lines of the Italian Dolomites – sweeping snow-topped mountain ranges,  blue rivers running through the valleys, cows in the green pastures etc.

Avocado on fresh, soft, white bread with some salt and pepper.

Shapes. They are my nemesis.

2013 6 inch marathon. My first ultra, I didn’t know what I’d gotten myself into. It was a very hot day, and I collapsed with about 500m to go (one leg cramped, then the other, and I just crashed to the ground). Four totally amazing blokes picked me up and carried me to the finishing line.

2015 WTF 100mi.  I’d been injured and then sick for about five weeks prior to the race, and didn’t expect things to go well. It turned out to be a dream-run: I ran side-by-side with Glen to the 100km mark, and then had a couple of outstanding pacers to take me through to the end.  No cramps, no stomach issues, no tightening of the legs, and over an hour faster than I’d ever imagined. In the last 20km I even got within 50m of the eventual winner. Totally stoked to finish in 2nd place.

What do you crave during a long run

Plan my next run, or watch NFL on the TV.