2015 was a fantastic running year for me with lots of amazing events and I wanted to finish off the year with a big double. The concrete shoe is a title given to those who run the 6 inch trail marathon (47k) after completing another endurance event recently before. I was competing in my second full Ironman (2 weeks before 6 inch) so I decided to give this a crack. A handful of hard-core crazies have achieved this level of insanity but the title had yet to be earned by a female. My Canadian girlfriend planted the seed of this tough-nut double endurance craziness the previous year & I took on the challenge. I wanted to see how far I could push my body at the end of a full year of endurance events.
During the year the Bunbury 24-hour track ultra was added to the W.A. running calendar and I backed up my 146k 24hr run with the city to surf marathon 2 weeks later, so the mental game was taken care of as I knew I could do it. I just had to take care of my body to get to the start lines. 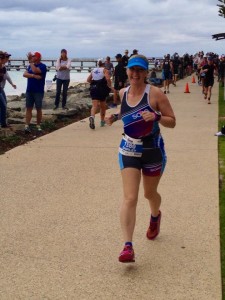 The swim (3.8k) was choppy and I’m comfortable in open water so slow and steady got me to the bike. The ride is my most fearful & highly anxious of any endurance events I indulge in and even thinking of that stormy ride, being blown across the road several times in the rain, raises my heart rate. 180k of pushing hard on the bike made the joy of getting on the run leg all the more sweet. I handed over my bike to the volunteer in charge of racking the TT’s with great pleasure and the first 3k of the run (42.2k) I was mentally writing the Gumtree ‘bike for sale’ ad as my muscles adapted from ride to run mode. I felt good and even did a few photo opportunity jumps in the 1st couple of laps. I walked through the aid stations that are generously placed every 2k and stuck with my nutrition plan of a gel every 30-40mins washed down with a mouthful of water and a swig of coke. This is a plan I have trained with and tested in many of my ultra marathons and it works for me, the only time I had tummy issues is when I deviated from this routine.
The finish chute was electric and this time I had the added bonus of finishing later in the dark due to a longer ride but I was on cloud nine as I had smashed my ‘fatigued run time’ by 19mins. With sore quads I celebrated at the finish line with multiple glasses of bubbles in the fantastic company of my friends, hosts and fellow ultra runners Frank and Marie. The following day I also added my 1st beer mile to my celebrations, this was a great fun event to do and I highly recommend anyone doing the Busso IM to enter. I’m not sure how we all ran the following day but I found the drinking part was much harder than the running bit.

2 Weeks Rest
Between the events I was having hip issues and not recovering as quickly as I would have liked. Given it was only 2 weeks, I spent that time resting with only one 3k run in my legs and aching hips. I also learned that another girl from the eastern states had also completed Ironman, ran the beer mile and was signed up for the 6″. I befriended Cath Hall on Facebook and had a few conversations with her discussing our amazing accomplishments and concrete shoe aspirations. She was travelling around WA with her husband and was trying to fit as many endurance events into her travels. Out of 300 marathon entries there were four of us running this event that gained us this auspicious tag, two males and two females. 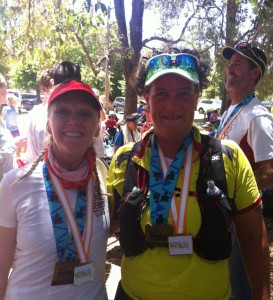 It was an early 2am start to travel down to the event with a car full of hairy ultra runners. I was suffering with hip pain as I checked in and greeted lots of girls I know from the ultra running scene in the ever growing queue to the ladies toilets. I boarded the bus to the start line with Callum who was taking on his own goal of running his first marathon distance; his challenge to himself for turning 21 a couple of weeks before.
Running and then walking up Goldmine hill, which is the start of the race, was fantastic as I said hello and chatted to everyone. Someone commented from behind that I was running with a limp. This limp did not improve for the entire event and it stopped me in my tracks as I jarred it badly on a downhill section. I think I frightened Callum, Aimee & Liz as I shrieked out in tremendous pain. It was a painfully slow long run through some beautiful bush trails which I had run several times before in fun group recons. Being greeted by Susan & Jaqui at aid 1 (23k) was a fantastic. I have looked after both these girls at other trail ultras and love how we all give back our service to the running community. They knew just what to do and I felt a bit jealous of their comfy spot in the bush. This is when I met Cath in the flesh for the first time. With rushed introductions and ‘nice to finally meet you’ done, I was off out of the aid station like a flash, banana in mouth and young Callum in tow. I couldn’t believe Cath was behind me in the race but only just, I thought she was further ahead and I was already resigned to the fact that I’d be the second female to earn the concrete shoe title. For the next 6 kilometres I was pushing Callum harder and power walked faster up the inclines before the conveyer belt. He even slowed down to look around to confirm that Cath could not be seen in the distance and I didn’t need to bust my gut trying to widen the gap between us. The 5k ‘out and back’ section includes a hill called the ‘Escalator’; I like to keep something new for race day so I had never included this section in my recon runs. I again shrieked out loud, but this time in pure delight at seeing the aptly named hill. It went straight upwards. Callum and I lay down for a quirky photo as others were scuttling downhill and trying to balance to stay upright. The concrete feeling had long since left my shoes and had travelled up my legs to my hips as I couldn’t lift my legs a decent height to run without it resembling a Quasimodo shuffle. Aid 2 was a fun set up with lots of the usual ultra crew taking care of us. This is where I saw Cath again on my way back down as she was heading up, she was making good ground so again I picked up the pace. Callum was happy to take more walk breaks around the 40k mark so I pressed on alone. It hurt, it was slow and it felt as if the cement mixer was mixing up a new batch of fresh concrete for me.
The last section was a mind numbing painful ‘left foot, right foot, repeat’. Coming closer to the finish the cheers and high 5’s got more frequent with friends leaving the finish area and a few keen photographers nicely positioned to get a shot of the last few runners on the trail. Done & dusted, goal accomplished. Limping across the finish was an exhilarating end to the a great endurance double and my running year. There was hugs aplenty and I proudly wore both my Ironman and 6″ medals at the presentations afterwards. Cath and I shared a celebratory beer at the finish and I wished her well on her future adventures.

I’m so glad to have completed this crazy double and I’m excited about upcoming events in 2016 but no more concrete running shoes for me.

P.S. from Running WA: The ‘Concrete Shoe’ is a title given to anyone completing a major endurance event shortly followed by the 6 Inch Trail Marathon. This endurance double has been completed mostly with the Busso Ironman & 6 Inch but has also been done with the Kepler Challange (60km mountain run in NZ) & 6 Inch and Coast to Kosciusko (240km) & 6 Inch.

Congratulations to  Geoff Foulkes-Taylor, Sam Hoffmann, Cath Hall and Shirley Treasure who all backed up Busselton Ironman 2015 with the 6 Inch Trail Marathon in 2015, a truly amazing display of physical and mental endurance.