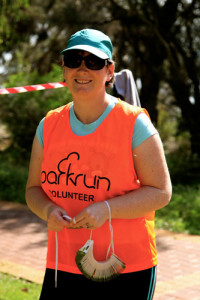 I started running a couple of years ago because (a) it’s cheap, (b) it’s local and (c) it burns lots of calories.

I used the Podrunner Intervals First Day to 5k podcast series to work up from 60 second running intervals to running non-stop for 25 minutes. It takes only 10 weeks to get there and I highly recommend it.  The music took some of the grind out of it and helped push me along.  Since then, I’ve had injuries and lazy brain and have fallen off the wagon for 2-3 months at a time, only to get back on again and quickly build back up to that 5km distance. The advent of parkrun in WA helped give me focus and the challenge of bettering my time, but now I want more.  I tried to build up to 10km last year and had problems, but having recovered from an injury and restarting (with lots of stretching) in November last year, I finally reached my goal of a 10k training run on January 25th.  It killed me!  But if I can do it once…. as it says in my favourite running book Run, Fat B!tch Run, “Slowly, slowly, catch-y monkey.”  I just have to keep putting one foot in front of the other!

At this point I don’t have one.  A Dream Run would be: finishing with a good time (for me) without being completely exhausted.

Unfortunately there are too many to pick a number 1…

Don’t have a lot of race experience… Rottnest 5k – it was SOOOOO hot!  And missing the Women’s Classic in 2015 due to injury – so disappointing.

WA Track Ultra 2015 – 3hr.  My longest race, longest distance of all time 😀  I was just killing time while Alexis ran the 24hr, and I was suffering with a chest virus, but I got that wash of euphoria as the race came to a close and I had DONE IT!  Legs of jelly for a while after, but pulled up really well the next day.

What do you crave during a long run?

Sing.  I belong to an a cappella quartet called Hi-Jinx.  I also co-direct a women’s a cappella chorus, A Cappella West, in Murdoch.  Both groups are current Australian champions for Women’s Barbershop.