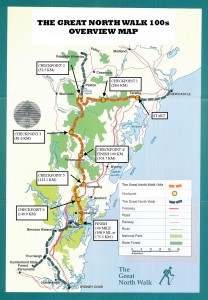 This was my big run of the year, spared no expense! Thank you to everyone for your well wishes and support, all your messages were a fantastic lift especially since the race was in the east and I had to leave my normal support crew at home.

Everything went well for the early morning start; many thanks to Rob Donkersloot and crew for a lift to the start line in Teralba. I had a reasonable nights sleep then the 0350 wake up alarm, quick shower, banana and choc milk breakfast, some toe taping, bags packed and away we go.

Check in was well organized, we were given a band for each wrist, one with your race number, the other with your weight, I was 77.9 kg. Race briefing was lengthy and hard to hear. 0600 and we’re out of the blocks. Wearing our hi-vis vests someone described us as looking like a bunch of demented council workers; we had to wear our flouro for the first 6 km, which was all on the road. There were two highlights in this stage, first is the massive climb into Heaton state Forest, just a taste of what was come later! At the top you come to an amazing view over the coast to the east, oops nearly missed the right hand single track turn off at the look out! Now we were in the jungle (second highlight). It’s cool and dark, you could imagine Luke Skywalker carrying Yoda in his backpack through this section, pretty technical and hard to move quickly. When I climbed out of the valley there was a bit of faster running on dirt road, it felt great to stand up tall and stretch my hips after all the crawling through the jungle. Arrived at CP1; 29 k’s in 3h 48m.

The next section was shorter and more runnable, with more down than up; heat however became a big factor, the forest ended, I was now in open farmland and then on a long gravel road through the Congewai valley. Into CP2 for a weigh in and mandatory gear check, I was greeted by Matt Buckley and Mick Thwaits who were both crewing for other other runners but kindly helped me with drinks and the gear check; thanks guys, I owe you both a beer!

I made two mistakes during the stage from CP2 to CP3, I missed a marker and took a 4k detour, then I ran out of water and fuel about 12k from CP3 (the Basin). I really struggled and felt very low; getting to the Basin CP3 was a great relief. Rob’s crew, son Bryn and Liz Bennett helped me here, with refueling and moral support, many thanks to you both.

It was dark now and picking out the trail with the narrow headlamp beam took a bit of adjusting. I ran with a guy called Dan for a while who new the course well, some nice runnable bits in this stage. Just as I was thinking about how I had not seen any wildlife, a bilby ran across the track in front of me! Then 20 minutes later a wombat did the same thing, very cool. CP 4 is also the finish of the 100 km race. It was nice to get a big cheer from the crowd as I arrived but I knew I still had 70 k’s to go. I made myself some noodles and took my time eating and getting ready for the next leg. Doug, from Tassie, had been in the first aid room, they had given him an injection to stop him vomiting and he had slept for 40 minutes. Feeling refreshed, he suggested we hit the trail together. Neither of us had crew or pacers and I was grateful for the company. We made a good team, Doug was reading the course description notes and I had the GPX file on my Suunto, getting lost was not an option. The small hours in the cold and dark were not easy and there was a fair bit of walking. At about 1am I remembered the No Doze! I can’t believe I had forgotten to take one yet. I gave one to Doug as well, he had never had one during a long run; I think he is a convert now! We were feeling better when we rolled into CP 5 for a feed of soup and hot potatoes washed down with plenty of coke.

A lot of the night k’s are a bit of a blur actually. I think it’s a combination of tiredness and the landscape being reduced to a small circle of light two metres in front of you. Sunrise meant we I had been going for 24 hours, we were getting close to the last CP. Doug and I decided to make the stop at CP6 as quick as possible to give us the best chance of finishing in less than 30 hours. We had a time goal now and the finish at Patonga was the next stop. 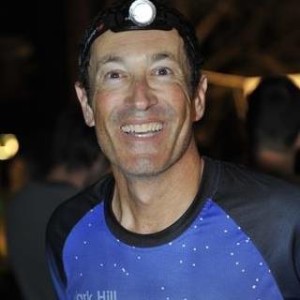 I knew the last stage had enough up and down to make it tough, especially after 25 hours of running and climbing. I was surprised how quickly it got hot; I had left all my head gear behind me in drop bags and the last stage has little, to no, shade. We had 5 hours and 5 minutes to cover the last 25 k, it was going to be close. I had to give Doug some encouragement with about 5 k left, he didn’t think he could keep the pace up to get under 30 but I could smell the beach now, even catching a glimpse sometimes. We ran every part we could, I was pushing Doug hard, I really wanted us to finish together after making such a huge effort through the night. With about a k to go you get a spectacular view over the ocean and the finish at Patonga. We knew we had the sub 30 in the bag now, we made the final 130 metre decent, “ding ding ding” as we crossed the beach we heard the bell ringing, the clock showed 29 hours 42 minutes; I had finished my first miler.

Doug and I posed for a couple of photos with the finish post and headed to the recovery shelter where I inhaled a very welcome egg and bacon sandwich. This is a super challenging trail and a great test of determination and endurance. Thanks again to all the people who helped make it possible and for the messages of support and congratulations, I am very happy with the way things worked out.