Just after sunrise, we listened to the last post and one minute silence, followed by reveille; I’m sure I was not the only one with a shiver down my spine.

A unique but appropriately themed event for 2015, being the 100 year anniversary of the Great War’s Gallipoli battle. The mostly West Australian 10th Light Horse regiment took part in this ultimately failed campaign; the carnage depicted in the final scenes of Peter Weir’s film “Gallipoli” took place at “The Nek” where the 8th and the 10th Light Horse were ordered ‘over the top’ and suffered massive casualties.

Instead of an entry fee we were asked to make a donation for the local RSL Club. We were given poppies by our RSL representative Peter, who  was very pleased with the $2,000 raised to help veterans and their families in Quinns Rocks, Merriwa area. This was a ‘fatass’ event created by local ultra-runner and beard enthusiast Shaun Kaesler. Hats off to Shaun who put in a massive effort and his own money to produce a first class experience for everyone involved. The enthusiasm and generosity of Shaun, his team of volunteers and the ultra-running community of WA was a pleasure to witness.

After ticking off my volunteer duties registering the 6 hour runners, I quickly prepared myself for the run. What a treat to have a young trumpeter play the last post and reveille for us prior to the start. One minute silence is always emotional and I thought about how lucky my own ancestors were to survive the horrors of the Great War. I toed the line with Nathan Fawkes and Jamal Fozdar; Nathan would go on to win the 6 hour race, Jamal would finish first in the 3 hour. My journey over the next 6 hours was a very different story. 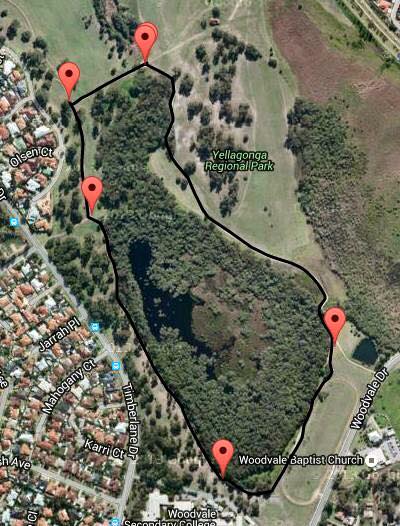 The course is a 2.5km loop in Yellagonga Regional Park, south of Ocean Reef Rd in Woodvale. For the first 3 hours we ran a counter clockwise loop. From the start/turnaround run 100 metres slightly downhill sandy trail (thankfully with a bit of grass either side), continue straight and over a short bridge then uphill for about 100 metres. Turn left onto bitumen bike path, nice shady downhill for about a kilometer, another left onto limestone path through a shady section with a s shaped wooden boardwalk over a pond (no side rails so don’t fall off!) continue along the limestone until you take a hard right onto the sandy out and back, 100 metres up to the turn around. We then did a small loop around the lap counters and past a well-stocked aid table: Coke, water, melons, bananas and sugary treats; everything a tired runner could ask for; and repeat. After the 3 hour runners had finished we changed direction; the clockwise loop meant about 1k of slight uphill and only a short decent, this combined with already tired legs made for a tough second half.

After keeping up with the leaders for the first couple of laps I slowed to what I thought was a more sustainable pace. About 2 hours in I was struggling with very tight and sore hip flexors; something I had not really experienced before. I found it hard to stay upright and my ITB was tight and sore at the knee. The ITB problem is nothing new and I can normally adjust my stride to help ease the pain. I was very uncomfortable and was fighting with the voices in my head about finishing at the 3 hour mark. The 3 hour air horn blasted and I kept running. By this time I was taking walk breaks and meeting other runners became a welcome excuse to slow down and have a chat. As is the case in all loop runs, there is a temptation to take an extended break whenever you pass home base. One visit I even sat down for a couple of minutes. I have had difficult periods in many long runs before, I was finding this harder than usual.

Photo by Paul van der May

Meanwhile, the kids’ race was a great success (they ran a shorter loop for one hour). I did not see much of it but I happened to be at the turn around point when they had just finished and I got to see my two kids receive their race medals which were military style dog tags. They both loved it and my son, Sean, was very pleased to achieve his goal of running 10k.

It was not a great feeling seeing my name slide down the leader board as the hours went past but I did muster enough of the ANZAC spirit to see the 6 hours out. In true Shaun Kaesler style there were plenty of frosty cold Roger’s beers for us to enjoy as the winners were acknowledged with a variety of themed prizes.

Great course, well organized, worthy cause, good friends, tired children, tired adults, fantastic volunteer support, crazy runners and cold beer. The foundation has been laid for a very popular event, Shaun is aiming for official status next year and possibly adding a 12 hour option. The solid numbers that took part in the inaugural 10th Light Horse Regiment 3/6 Hour, shows there is plenty of appetite for another quality ultra event in WA.